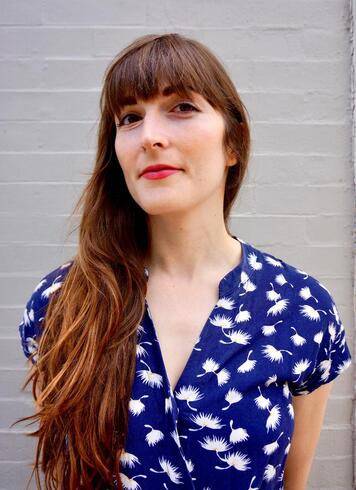 Elizabeth June Bergman is a dancer, dancemaker, scholar, and educator currently based in Philadelphia. Her creative work takes the form of solo performance, dance scholarship, dance films, and collaboration with other dance-makers and artists and has been presented nationally and internationally.


EDUCATION AND AWARDS:
Bergman earned her Ph.D in Dance Studies in the Dance Department at Temple University in the fall of 2019. Her dissertation examines practices of attribution and recognition, commercialism and commodity culture, and racial politics and racial ideology in the Los Angeles commercial dance industry through the case study of Michael Jackson and his choreographic collaborators from both street and studio dance backgrounds throughout the 1970s and 1980s. Her doctoral studies were fully supported by a University Fellowship and a Dissertation Completion Grant. Bergman was awarded the Edrie Ferdun Emerging Scholar Award by Boyer College of Music and Dance in 2017 and was an Associate Graduate Fellow in the Center for the Humanities at Temple (CHAT) in 2018–2019. Bergman holds an MFA in Dance Performance from The University of Iowa (2009) and a BA in Dance from DeSales University (2005).  She was certified as a 200-hour yoga teacher by James Miller in 2011 and received an additional 300-hours training from Rishikesh Yog Peeth in India in 2014.

TEACHING:
In addition to teaching ballet, modern/contemporary, and improvisation as a freelance artist both nationally and internationally, Bergman taught various undergraduate/graduate courses at The University of Iowa, including Introduction to Dance Studies, Dance History: Baroque to Contemporary, and Special Topics in Body Conditioning: Yoga between 2011 and 2015. At Temple University, she developed and taught the undergraduate general education course Michael Jackson: Entertainer, Artist, Celebrity between 2016 and 2018; she will teach this course and Creating Dance Histories at Temple in spring 2020. She has guest lectured on topics including social dance,   Hollywood film and music videos, and the history of modern yoga. She taught hatha yoga at Heartland Yoga (Iowa City) between 2012 and 2015.
​
PERFORMANCE:
In addition to her solo performance work at various venues across the U.S, Bergman has choreographed works in collaboration with the dancers of The Collective (Baltimore), tbd.Dance Collective (Omaha), and Creighton University (Omaha). She has created several dance films in collaboration with filmmakers and  composers that have been screened at multiple film festivals. As a dancer, Bergman has performed in the work of many independent choreographers including Jennifer Kayle, Charlotte Adams, Rosy Simas, April Sellers, Amy Lynne Barr, Analia Alegre-Femenias, Lynn Andrews, Emily Gastineau, Joanna Rosenthal-Reed, Nichol Mason-Lazenby, Ishmael Houston-Jones, Lela Aisha Jones, and Christina Eltvedt.